Posted at 14:47h in Newsroom by Laura Kaiser
Share 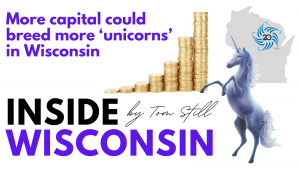 For all the excitement about Madison-based Fetch Rewards achieving “unicorn” status, meaning it is one of about 250 U.S. startups valued at $1 billion or more, this fairy tale almost never happened.

Many investors once looked askance at Fetch Rewards, young founder Wes Schroll and his business model of a free app that awards gift points to shoppers in exchange for scans of their receipts. It didn’t seem like much of a money-maker to most Wisconsin investors in the mid-2010s, although a few angel capitalists and boutique funds took a chance.

To raise the hundreds of millions of dollars that followed, Fetch Rewards looked well beyond Wisconsin to New York, San Francisco and London, places that might well have lured this unicorn to greener pastures. Instead, the company kept the bulk of its operations in Madison while doing business nationwide.

For Wisconsin to fill its startup stable with more unicorns, that pattern of raising early money in the state and looking elsewhere for later-stage dollars must change. That’s why the proposal to invest $100 million from the state of Wisconsin in a privately matched “fund of funds” makes sense.

Investor Mark Bakken of Madison-based HealthX Ventures believes he has invested in a couple unicorns in waiting, one based in Madison (Redox) and the second in California (Medable) with operations in Madison. Both are companies in the digital health space, where HealthX has done the bulk of its investing.

HealthX has raised a combined $76 million in its two funds, the latest of which attracted a maximum number of investors, but Bakken knows he can’t go it alone if his portfolio companies are to reach full potential. It will require co-investments from other funds, almost all of which are larger and outside Wisconsin.

If the proposed “funds of funds” comes to pass, Bakken said, it will help bring more of those investors to the Badger state.

“At a high level, it would expedite things. It will pour a little gas in the tank to accelerate growth,” he said. “We’ve got a good framework in place in Wisconsin. More capital will increase the odds of Wisconsin companies getting over the hump.”

If the Wisconsin Legislature approves, the state would join neighbors such as Indiana, Illinois, Ohio and Michigan in creating such a fund, which would be a one-time investment and matched over time by private dollars at a two-to-one ratio. Experience in other states indicate the matching ratio usually exceeds what’s required, because such funds tend to attract outside dollars – and outside venture capital firms – to locally sourced deals.

While Wisconsin has the talent and technology to compete nationally and beyond, it doesn’t have enough locally managed capital to meet the demand. Even the largest funds in Wisconsin can only take on a limited number of investments, sometimes because those prospects are outside their specific sectors of expertise but more often because there’s not enough money to go around.

HealthX is a prime example. While it has been listed as one of the nation’s 10 most active venture capital funds in “enterprise health and wellness tech,” it almost always invests with other funds – and usually outside Wisconsin. Bakken believes a state-backed fund of funds will help draw those out-of-state dollars much closer to home.

Most Wisconsin investors wouldn’t see a larger fund of funds as competition, but as downstream collaboration for deals they have already vetted, and which need multiple rounds of cash to succeed. For the state’s active angel investors, it would be another way to “follow on” the smaller but generally most risky rounds they can offer.

“The Land of 10,000 Startups” is Bakken’s bumper-sticker hope for Wisconsin, which isn’t completely fanciful if those young companies can fish in waters where investor dollars are more plentiful. A state fund of funds can help to stock the lakes.