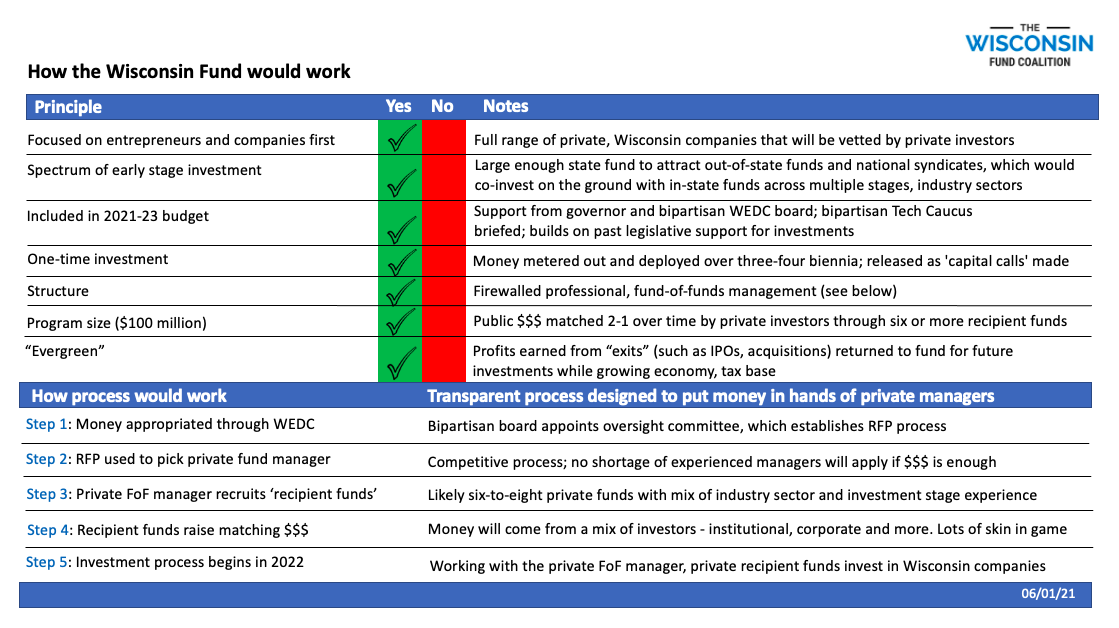 How does a venture capital fund of funds work?

Think of a fund of funds as a pool of venture capital organized under a central fund, which acts much like an umbrella. That central fund would invest in related “recipient” funds – perhaps early-stage funds already existing in Wisconsin – to deploy capital over time in high-growth companies.

Is the proposal by Gov. Tony Evers a new idea, either in Wisconsin or elsewhere?

While it’s new to the governor’s budget bill, similar investments have been made by other states in the Midwest and around the country. Illinois, Indiana, Ohio and Michigan all have larger funds of funds, although their formats and funding sources vary. A fund of this size and scope has been a specific policy goal of the Wisconsin Technology Council since 2012 and was renewed in the 2021 edition of the council’s “white papers” report.

Wisconsin already has good experience on a smaller scale. In 2013, the Legislature passed Act 41, which led to the creation of the “Badger Fund of Funds.” Act 41 levered the state’s investment of $25 million with private investment dollars. It passed by near-unanimous majorities in the Assembly and Senate and was signed into law by then-Gov. Scott Walker. Every state dollar invested so far (through Dec. 31, 2020) has been matched 3.3 times by private dollars.

How can we be confident that these programs will work?

These are proven models. The recommendations are based on the best and most successful attributes of what has been proven to work in other states, following are some examples from other states with fund-of-fund models:

Why now? Isn’t Wisconsin in a recession because of COVID-19?

The Wisconsin economy has certainly been hit by the pandemic, but parts of that economy have stayed solid and are emerging even stronger. The tech-based economy is one of those places. The National Venture Capital Association recently reported that 2020 was a banner year for U.S. investing, despite COVID-19. Investment opportunities in Wisconsin are growing, not shrinking.

How would such a fund help all of Wisconsin, not just those high-growth companies clustered in a few spots?

First, Wisconsin’s high-growth economy is growing in places outside the traditional centers for such activity. Think cities such as Green Bay, Appleton, Eau Claire, Kenosha, Janesville, Beloit and more.

Second, young high-growth companies buy goods and services throughout the state. The supply chain can help many non-venture-backed companies.

Third, high-growth companies pay salaries that are often 50% above the statewide average – which means more tax revenue, over time, to help pay for other state priorities.

What about those other priorities, like roads and schools? Couldn’t $100 million be put to better use there?

There are always competing priorities in government budgets, but it all loops back to generating tax revenue from a high-growth, robust economy to ensure basic public needs are met. No one wins if the economy fails to innovate, as that kind of slowdown makes it harder and harder to meet public needs.

Would such a fund compete with existing private funds?

Not if it’s well-constructed. Most likely, it will help augment them by providing much-needed capital in Wisconsin. The Wisconsin Fund calls for a 2-to-1 overall private match, which means private investors that want to take part must provide that kind of match. Some of that money will come from sources beyond those being tapped today.

Is the fund targeted in a way that will provide maximum effect?

Angel and seed investors in Wisconsin have carried a lot of the freight over time, often making some of the riskiest early-stage investments. No one wants those investments to get “stranded” for lack of follow-on dollars, often referred to as Series A or Series B rounds. Right now, too many strong, young companies in Wisconsin have trouble crossing the “valley of death” that is most often bridged by Series A dollars.

Is there enough deal-flow in Wisconsin to support such a fund?

Yes. An informal survey of just eight early-stage investors in Wisconsin revealed they could collectively invest between $92 million and $116 million per year in their existing Wisconsin-only portfolios – not counting new companies they have yet to see or consider as investment targets. There is plenty of demand.

How are taxpayers protected?

The proposal is not a loan or a grant. It’s an investment that is designed to generate a positive return. The state of Wisconsin would be a full partner, just like the private investors. The state would have the same opportunity as other investors to follow the progress of investment portfolios. The selection process for fund managers would be competitive.

The Wisconsin Legislature will review the proposal, just as it does other state budget provisions. The Evers proposal also calls for the Wisconsin Economic Development Corp. to establish an oversight board for the new fund.

No venture capital investment is ever guaranteed, but with the right implementation and fund managers, the overall return on investment can be a net positive for Wisconsin taxpayers.

Will under-served communities and people get a shot at investments?

At least 20 percent of the state’s investment must be made in women-led or minority-led companies and/or rooted in underserved communities, under the proposal. Studies indicate investments by such funds perform well in their returns.

How quickly after passage would the fund-of-funds start making investments?

Several factors impact the speed. The longest factor is the length of time it would take for a fund to secure private investment matching dollars. However, Wisconsin is currently home to many funds that are up-and-running, reviewing deals and making investments. If any of these funds would be recipients of state investment, they would be able to start deploying the investments immediately.

How can we be certain the state is getting its fair share of the returns under this proposal?

The investment made with state dollars would be under the exact terms as other investors, with the state receiving profits from investments that go well.   Fund managers are motivated to make good investments because they only receive gains if investors (including the state) recoup the cost of all investments and fees.

On top of typical returns, the state also receives benefits through employment growth, expanded spending on capital improvements/facilities and utilizing more Wisconsin suppliers and service providers.  Unlike other investors, the state collects taxes on the income of investors, managers, founders, and employees, sales tax and property taxes on top of the investment returns.

The governor’s fund-of-fund model requires all state dollars to be invested in Wisconsin-based businesses, but not the private matching dollars. Why?

Matching private dollars will be virtually impossible to raise if geographic constraints are imposed on those private matches.  Other states that have used a similar model have experienced a significant increase in risk capital investments in their businesses, higher than the amount of dollars invested by the state. For example, Ohio saw a 10-to-1 match over time.

An additional benefit is the fund-of-funds models will attract new venture capital funds to Wisconsin. They may open up offices and start reviewing Wisconsin-based entrepreneurial deals. These funds will come to the state with out-of-state relationships, providing an expanded network of investors who would otherwise not be seeing Wisconsin-based deals.

Isn’t this something that is best left to the private sector?  Why does the state need to be involved?

Wisconsin, along with some other Midwestern states, is known as a “fly-over state,” meaning venture capitalists fly over Wisconsin on their way to the coasts but typically do not stop here to review deals. Incentivizing them to open new funds and offices in our state is similar to “priming the pump.” Once Wisconsin has a good, large base of venture capital funds, other funds will start looking here too. Wisconsin has been consistently lagging when it comes to venture capital, leaving things entirely to the private sector just means more of the same. Priming the pump is a way to change the status quo.

Gov. Evers’ fund-of-fund proposal has included input from members of the Wisconsin entrepreneurial ecosystem — venture capitalists, angel groups, entrepreneurs, economic development professionals and service providers – who have first-hand understanding of Wisconsin’s existing financing resources, the clusters of entrepreneurial strength, and the gaps that need to be addressed to enhance our entrepreneurial competitiveness.

Don’t these venture-backed companies often get acquired? Are we encouraging investment in companies that won’t stay in Wisconsin?

It is true that investors in these companies typically have an objective of having the company either go public or be acquired.  In the case of an acquisition, there is certainly a risk that the acquirer could choose to relocate the company out of the state.  However, that is typically the exception rather than the norm.

Most high profile acquisitions in these sectors in Wisconsin (Third Wave Technologies by Hologic, NimbleGen Systems by Roche, Mirus by Roche, Pan Vera by Invitrogen, Gala Design by Cardinal Health  (now Catalent), Jellyfish by Microsoft, NeuWave Medical by Johnson & Johnson) have resulted in expansion of operations in Wisconsin rather than their closure. In fact, these acquirers often bring resources for expansion that the small company lacked.

In many respects, building companies that Fortune 500 companies want to buy is a more effective means of getting them to establish a presence in Wisconsin than engaging in the game of offering incentives in competitions against other states for the location of a new facility.  When those acquisitions do occur, Wisconsin can further improve the opportunity for retention and expansion by establishing a “strike force” initiated by a call to the acquiring CEO by the governor on the day of the acquisition announcement, followed by a team of professionals who are prepared with ready-made plans to educate the acquiring company about the resources and opportunity to expand in Wisconsin.

Tell me more about The Wisconsin Fund Coalition.

The Wisconsin Fund Coalition is made up of people, companies and organizations that support the 2021-2023 budget proposal for state investment in a fund of funds. It is affiliated with the Wisconsin Technology Council, which has members from private business, the investment community, academic research institutions, health care, law, accounting and other disciplines tied to the tech-based economy.

In the past, the Tech Council and related coalitions supported the “Qualified New Business Venture” investment credits enacted in 2005 (Act 255) and the Badger Fund of Funds in the mid-2010s (Act 41),