Posted at 13:17h in Newsroom by Laura Kaiser
Share 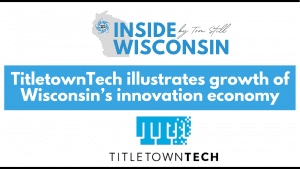 GREEN BAY, Wis. – Just west of iconic Lambeau Field, in the shadow of the stadium that is home to the Green Bay Packers, a gleaming new building symbolizes the convergence of tradition and innovation in Green Bay.

It’s called “TitletownTech” a 13,000-square-foot hub that is home to 20 emerging companies, a $25-million investment fund, three main floors of tech-enhanced space and the dreams of entrepreneurs who are finding their footing in northeast Wisconsin.

As much as anything, TitletownTech is an example of how Wisconsin’s tech-based economy isn’t limited to strongholds such as Madison and Milwaukee and is taking root in cities searching for renewed economic identities in a changing world.

TitletownTech also symbolizes one factor holding back that growth – lack of major venture capital investments to bring young companies beyond the seed stage to maturity.

In a Wednesday meeting, people interested in a state budget proposal to launch a $100-million “fund of funds” to enhance Wisconsin’s ability to attract more capital heard an overview about how the fund would work to attract matching private dollars and strong private managers. Speakers also stressed that while Wisconsin has a vibrant angel capital sector, it lacks enough venture capital to bring young companies to the next stage.

Craig Dickman, the managing director of TitletownTech and an entrepreneur who has launched his own companies, noted the biggest gap in capital is beyond the “seed stage” – generally defined a few million dollars or less – and in the realm of $5 million and well beyond. That is the kind of investment that can turn a small startup into a company that is adding jobs and economic value in much larger increments. Investments in the tens of millions of dollars are often needed for most life sciences companies, which is one of Wisconsin’s technology sweet spots.

Cory Nettles, the co-chairman of the Wisconsin Fund Coalition, an investor and a former state Department of Commerce secretary, echoed that opinion. He noted that while homegrown Wisconsin investors can take young companies so far, the state is an underperformer when it comes to major venture capital dollars.

In fact, Wisconsin is home to just one-third of 1 percent of all U.S. venture capital, even though it represents close to 2 percent of the nation’s population.

Two companies in the TitletownTech portfolio served as examples of the need as well as the opportunity for emerging tech hubs such as Green Bay, which has been bolstered with help from the Packers, Microsoft, UW-Green Bay, NEW North and other players who want to see the region thrive.

Strive is a digital care platform to support for orthopedic patients, especially before, during and after procedures such as surgery. It was founded by an orthopedic surgeon who wanted to improve outcomes for patients while saving money associated with return visits, overuse of medication and poor rehabilitation. Dr. Padraic Obma leads a team that has built a federally compliant platform that can integrate with major electronic health records systems, such as Epic and others, to help guide and monitor patients.

ChemDirect is what co-founder and chief executive officer Tyler Ellison describes as an “Amazon for chemical supplies.” A Wisconsin native, Ellison founded ChemDirect in California but moved the company back home after being encouraged by TitletownTech and general conditions in the state and the Midwest. ChemDirect works with companies that need chemicals, often for industrial or manufacturing use, getting them faster delivery and better pricing.

They are two examples of a portfolio that include other companies in health care, advanced manufacturing, agricultural tech, artificial intelligence, analytics, environmental mediation and more – all about a block from Lambeau Field in the 45-acre “Titletown” district.

Other cities are seeing similar interest in tech-based innovation, including Beloit, Janesville, Kenosha, Racine, La Crosse, Eau Claire and more. However, once the young companies in those places have matured beyond the seed stage, they can have trouble finding dollars to take them to the next level.

Other states have created funds of funds to advance their innovation economies, including Michigan, Indiana, Ohio and Illinois. Michigan is now the fastest-growing state for venture capital investments as a result.

Wisconsin can do the same, and it’s not just a Madison-Milwaukee party. Emerging innovation hubs can help all of Wisconsin grow if they get a helpful shove for a state-backed fund of funds.