Posted at 10:45h in Newsroom by Laura Kaiser
Share 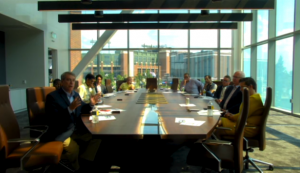 Startup community leaders and investors alike are looking to rally support for a proposed $100 million state investment in a “fund of funds” contained in Gov. Tony Evers’ budget proposal.

“I’m excited about the venture fund because it’s the next step for Wisconsin,” WEDC CEO Missy Hughes said yesterday during a forum hosted by the Wisconsin Technology Council. “I hope that folks who are on the line and here can continue to advocate for this, and hopefully we can get this rolling and really create this magnet for venture capital.”

Under the proposal, the $100 million in state funds would be privately matched by recipient investors at a 2-to-1 ratio over time, according to an overview from the Tech Council. The group’s president, Tom Still, echoed Hughes’ call to action and urged participants to contact their legislators to express support.

“This initiative by the governor for this $100 million fund of funds is vitally necessary and quite frankly long overdue,” he said yesterday, emphasizing the bipartisan nature of the Wisconsin Fund Coalition that’s supporting the proposal. He serves as the coalition’s co-chair.

As laid out in the governor’s budget proposal, this one-time investment would be accounted for in the pending state budget, which would run through mid-2023. If passed as part of the budget or as separate legislation, an advisory committee led by the Wisconsin Economic Development Corporation would begin the process of selecting a fund manager, who would then recruit recipient funds.

Still said if the proposal is passed as currently written, he expects six to eight recipient funds would be selected, with no one fund getting more than $25 million of the total state investment. He expects the fund could be set up within the first fiscal year after being passed.

“We hope, as a Tech Council and as a fund coalition, that it would attract money from elsewhere,” he said. “It’s never been that Wisconsin has done all that well at attracting money from other places… But other states in the Midwest have done this successfully, and have done it in a way that points the way for us.”

He pointed to states like Michigan, Indiana, Illinois, Ohio and others outside the region that have successfully launched state-backed funds to inject capital into their investment networks. During the calendar year 2020, he said Wisconsin saw $485 million in total investments, compared to $455 million in the prior year.

“But guess what — a lot of our neighbors did way better,” Still said. “Michigan had $3.1 billion in total angel and venture investing. That’s a big difference. Yes, Michigan is some bigger, but it’s still a huge difference and we can get there.”

Still contrasted the proposed fund of funds with the earlier Badger Fund of Funds, which was created in 2013 with $25 million in state funds and went on to raise another $10 million from the private sector. He noted that previous effort resulted in $3.3 dollars going to Wisconsin companies for every $1 invested in the fund. The proposed new fund would be a separate effort, but proponents expect it would have an even greater impact due to its larger size.

“Our state’s future has got to be about the start and the growth of high-performing companies,” Nettles said, noting entrepreneurs in the state are being drawn elsewhere by greater availability of venture capital. “There’s some green shoots in Wisconsin in this space, and this is our opportunity to really accelerate the growth of those green shoots by accelerating capital formation.”