Posted at 09:57h in Newsroom by Laura Kaiser
Share 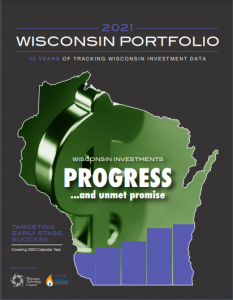 The latest edition of “The Wisconsin Portfolio” shows more than $483 million was raised by the state’s early stage companies in 2020, a record for any calendar year in Wisconsin but still not on par with other Midwest states.

The report by the Wisconsin Technology Council and its Tech Council Investor Networks showed 110 angel and venture capital deals and four crowdfunded deals, down from 121 total deals in 2019. Average and mean deal sizes grew in terms of dollars invested, which was consistent with national trends and a sign that more young companies are surviving and growing.

Despite a record year, Wisconsin lagged states such as Michigan, Minnesota, Ohio, Illinois, Indiana and Missouri, even after accounting for differences in population. Michigan recorded $3.1 billion in investments, for example, and is now the nation’s fastest-growing venture capital state in percentage terms over the five years beginning in 2016. Illinois, Minnesota and Ohio were each billion-dollar-plus investment hubs in 2020, along with Michigan.

“Other states are doing more to support their early stage economies through policy initiatives such as ‘funds of funds’ that lever public and private investment,” said Tom Still, president of the Tech Council. A committee of the Wisconsin Legislature recently turned down a proposal for a $100-million state investment in such a fund.

Using public reports, filings, surveys and more, the Tech Council tracked a total of $483,663,700 invested in 114 companies. Companies raising the most were Fetch Rewards, SHINE Medical Technologies, NorthStar Medical Radioisotopes and Sunvest, which collectively accounted for about $280 million of the state total.

For nearly 60% of early stage companies that secured funding, 2020 was the first year doing so while the remainder received continued support. Wisconsin’s investor tax credits were used more in 2020 than the previous three years. About $16 million in angel and venture tax credits (Qualified New Business Venture) representing nearly $65 million of investments in 77 early stage companies were charted. Other trends of note in 2019:

“On balance, our ecosystem continued to mature in 2020, despite the effects of the COVID-19 pandemic,” Still said. “It’s great to see major deals because it signals more companies are moving beyond the startup stage. Much work remains to be done, however, to take full advantage of Wisconsin’s assets in research, technology and talent.”

Here is the full report: https://wisconsintechnologycouncil.com/publications/wisconsin-portfolio/

The 13th annual publication also features a profile on Tim Keane, the 2020 inductee to the Wisconsin Investor Hall of Fame; policy highlights and updates; a primer on early stage investing in Wisconsin; and a resource guide. It also includes charts and graphs that detail deals by industry, geography, round size and more.