Inside Wisconsin: Fund of Funds idea could get new life as separate bill

19 Aug Inside Wisconsin: Fund of Funds idea could get new life as separate bill

Posted at 12:11h in Newsroom by Laura Kaiser
Share 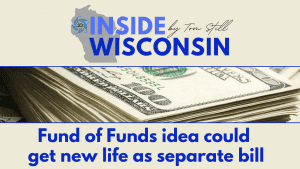 When the Wisconsin Legislature declined to include a privately matched, $100-million state venture capital investment in the 2021-23 state budget, it wasn’t because lawmakers were foreign to the concept.

Over time, the Legislature has twice worked with separate governors – Democrat and Republican – to enact programs that have raised Wisconsin’s startup and emerging company profile. The first was the nationally copied Qualified New Business Venture tax credits that took effect in 2005; the second was the Badger Fund of Funds program launched in the mid-2010s.

The $100-million program included in Gov. Tony Evers’ budget was a natural progression of such efforts, and in keeping with what other states have done in recent years to leap ahead. So why wasn’t it adopted by lawmakers?

Evers offered his views during the latest edition of Innovate 608, a podcast produced by Madison accelerator StartingBlock. He believes some in the Republican-dominated Legislature didn’t like it because it was his budget proposal and not their own.

“This is Evers’ idea. We don’t like it because it’s Evers’ idea,” the governor said when asked why it failed to pass. “I know there are some legislators having second thoughts… I think some people are reconsidering that.”

In a world where political credit is the coin of the realm, that is certainly part of the answer.

It’s also true that some legislators had questions about the governance of the fund from an administrative standpoint. Others questioned where the state would get the pump-priming cash, although it is now predicted the state will reach June 30, 2023, with an ending balance of $1.7 billion. Some others questioned whether it was a state prerogative to enact such a program, even though there is ample precedent for doing so.

In his interview, which is carried on the sponsoring Madison.com platform, Evers added a wrinkle that wasn’t previously in the mix. He suggested the state is checking whether federal money through the American Rescue Plan Act can be put to work in other small business programs, thus freeing state dollars for a one-time fund of funds investment.

“We are trying to use some of our federal money … to backfill” in other economic development programs, said Evers, adding he is optimistic a separate fund-of-funds bill could pass muster if pieces fall into place. “We will get there.”

Federal COVID relief dollars are being used for a range of priorities nationally and in Wisconsin, including Main Street businesses, agriculture, tourism, lodging, the arts and more. If federal dollars can free up other revenue sources, it makes sense to consider investments in an asset class – venture and angel capital – that has consistently performed well over time while producing innovative companies and high-wage jobs for the economy.

If the state makes a one-time investment, it would not be drawn all at once, but likely over the normal 10-year cycle of any venture fund. The state would stand to profit over time, just like other investors. Or it could choose to plow any profits back into the fund, making it “evergreen” and beneficial to young companies for years to come.

It would be matched 2-to-1 over time by private dollars, attract investors from outside Wisconsin, and build on momentum already evident in Wisconsin’s angel and venture economy.

In 2020, despite the COVID-19 breakout, young Wisconsin companies raised a record $485 million in angel and venture capital. That compares to about $10 million just 20 years ago. With more coastal investors looking to Midwest states for deal flow, a state-backed fund would act as a magnet.

Republicans and Democrats alike deserve credit for warming the early stage investment climate over time, taking actions that have helped to “de-risk” many private deals that otherwise may not have been funded. If a separate bill this fall revives the fund-of-funds idea, they could do so again.